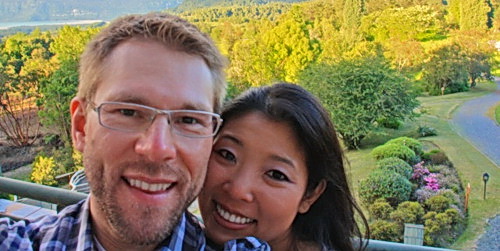 This month we’d like to share a very entertaining blog from Hess Kim who was on the December 10 – 20, 2011, Bicycling Patagonia’s Lake District Plus! the Island of Chiloé trip. She uses photos with short captions to share her story – warning –  her enthusiasm, spirit of fun and great sense of humor are infectious. In fact she’ll either inspire you to bicycle in Patagonia, or you might consider finding out where she’s headed next so you can start traveling with her. Here’s a little background to get you started.

Hess became a member of the New York Cycle Club where she discovered her passion for cycling and a boy in spandex, named Fredrik.  Together, they embarked on a six month adventure living in Buenos Aires and traveling throughout South America.  It was for this trip she began her blog, “que dia es hoy.”  Hess and Fredrik have since returned to New York City, where she is a student of the Dharma Mittra Life of a Yogi Teacher Training program and believes that “yoga is the perfect complement to cycling.”  They are looking forward to the future where they can bike and eat their way through many more countries!

ExperiencePlus! has just posted the new departure dates for the late 2012, early 2013 season for tours in Chile and Argentina. Book by August 1st, 2012 and you’ll save $200, per person.