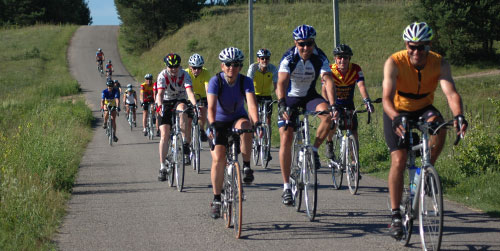 The League of American Bicyclists is the nation’s premier bicycle advocacy group which, over the last forty years, has developed THE national standard in bicycle safety education. It is unfortunate that most people learned most of what they know about safe cycling in fourth grade and haven’t updated that knowledge since. So this brief article is calculated to provide an update to those of you who bicycle for fun and for those who use the bicycle as practical transportation.
The premise of the entire League Cycling Instructor curriculum is that “cyclists fare best when they act and are treated as drivers of vehicles.” As a recreational cyclist on tour, out for a fun day ride, or using your bicycle as an efficient means of running errands if you practice this principal in “driving” your bicycle you should be safe and sound.
As a bicyclist you should assume even more responsibility as a defensive “driver” than when you are in a motor vehicle. Defensive “drivers” should commit no driving mistakes and even more importantly, they should adjust their behavior on the road to compensate for the potential errors of others.

In short, it is YOUR responsibility to