In 2022, ExperiencePlus! celebrates 50 years of guiding award-winning bicycle tours throughout Europe and beyond. Our European staff are the backbone of our operation. Whether tour director, fleet manager, mechanic, or tour manager, these folks work tirelessly behind the scenes to make sure every tour we run is expertly prepared, organized and equipped. As part of our 50-year celebration, we’re introducing a few folks whose role has grown and evolved alongside EP!

The ExperiencePlus! Tour Manager is like a magician with an underappreciated bag of tricks. They make hotel rooms appear out of thin air. They transform tired meals into stunning feasts while no one is watching. They can pull an archaeological guide out of a hat.

They don’t do this from a stage while all eyes gaze expectantly. Instead, they work undercover, sometimes very late at night, imagining possibilities, solving intricate logistical issues, and always forward-thinking so that the next tour goes off without a hitch. One never knows when the unexpected could occur.

Italy Tour Manager Sara Verlicchi likes to joke that the most important experiences she’s had in her life have resulted from random “mistakes” and “emergencies.” What better training for being an ExperiencePlus! tour manager?

In high school, Sara’s best friend roped her into a self-supported bicycle tour with two other guy friends, only to back out of the tour a week before.

“I had no idea how to shift [a bicycle with several gears]. I had no bicycle,” she says. “But Igor and Luca decided they could manage to have me on tour with them. In the end, we had the best vacation. From that year, every year we were planning our next tour.”

Sara, who grew up in Bagnacavallo near Faenza – location of EP’s European headquarters, began tour-leading for ExperiencePlus! in 2004. She was attending university in Venice, studying architecture, and needed a summer job. She learned about the job from Igor, her high school friend mentioned above.

“We were running completely booked Tour de France tours and needed as many tour leaders as possible,” she says.

Given her location at the time, it became no surprise to Sara that in her first three years with ExperiencePlus! she would lead almost nothing but Venice to Florence/Pisa Bike Across Italy tours. Yes, she eventually got out on other tours, but in 14 years of leading tours, Sara biked across Italy more than 20 times.

Sara’s expertise with the tour, along with her deep knowledge of how EP tours, made her an excellent candidate in 2012 for filling the shoes of outgoing Italy Tour Manager Bea Tassinari. Sara considers this departure another emergency.

Sara had temporarily shifted her EP duties from tour leading to administrative support because she was pregnant. She agreed to take on the new role, but not without hesitation.

“I knew that whenever I was going on tour, Bea had everything prepared,” Sara says. “If we had a problem, we could call her any time and she had the right solution. I just didn’t know if I could do it so well.”

Nearly every current and former EP tour manager first worked for ExperiencePlus! as a tour leader. No other experience prepares one so thoroughly for learning how to manage every tour detail, from making hotel reservations more than a year in advance, to arranging every group dinner, to coordinating every itinerary and route change with the U.S. staff, to preparing the tour leader team for total success in the field.

For Sara, the biggest challenge was learning how to work with hotels to get the best deal possible. “I did not even know what an ‘option’ was or that it existed,” Sara says. When EP creates the following year’s tour calendar, tour managers negotiate with every hotel on a tour to hold, say, eight to 12 rooms for us until a specific date. This ‘option’ usually expires 30-90 days before a tour begins.

In one season, Sara arranges more than 400 nights of options on the nearly 50 departures she manages in Italy. This work became extremely challenging once the pandemic began and tours were cancelled, re-booted, and canceled again. “COVID’s impact on the hospitality industry will be felt for years to come,” says EP co-owner Maria Elena Price.

In the meantime, Sara will keep doing the trick she does best: herding cats while juggling plates. Between managing the never-ending shuffle of hotel needs to helping organize private departures and custom tours and meeting with tour leader teams before they go into the field, Sara is a magician extraordinaire.

Sara’s love for travel and bicycle touring keeps her energized. Every year she and Igor, the once high school friend who is now her husband, as well as the EP fleet and logistics manager, load their bikes and son, Rocco, into their camper van and set off on spring, summer or fall adventures in search of new rides in places familiar and unknown. 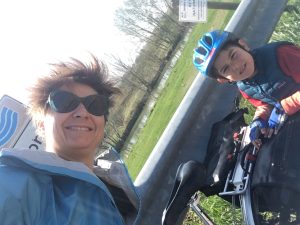