Meet Your Tour Leaders: Cristina Taioli Tours the US 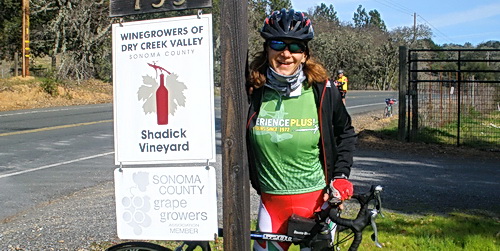 I think I have one of the nicest jobs…biking in Italy and Europe! For the past two winters I’ve been fortunate to spend a 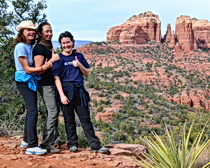 month in the States visiting with our travelers, hosting happy hours, presenting slideshows and talking to people about ExperiencePlus! and my work as a Tour Leader.  I’ve visited incredibly nice people, who share my passions: the bicycle, the journey, the culture, the experience, the challenge!

This year I started in Arizona, where I was welcomed by a “jumping cactus,” that found my ankle very attractive, while I was hiking around Scottsdale. I wiggled and shook my leg but that little ball of spines simply would not budge. I got more aggressive with my effort and it finally broke free but left 10 needles firmly planted in my skin! I had to pull them out one by one, and for about a week my skin went from blue to green to red then yellow, and my ankle was double its normal size! To add insult to injury when I tried to explain the situation to my father, a doctor, he replied: “What have you been drinking in the States!”.

I was joined in Arizona by Silvia, a friend and colleague from the ExperiencePlus! office in Italy. We rented a car for few days, and drove all the way up to Utah, through Monument Valley. It was Silvia’s first time in the US and her first time driving an automatic. I suspected I was in trouble when she began looking for the third pedal, and asked what the letters R, D, N, P stood for. I had a flashback to the movie “Thelma and Louise” and promised myself I’d take over the driving before we reached the G 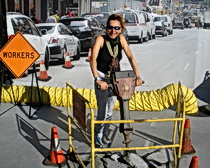 Ashland, Oregon was my next stop — a nice little town famous for its “Shakespeare Festival”. Against my better instincts I joined Jane, my friend and host, at her fitness club for an 8:00AM workout session. I spent the entire hour telling myself to try and keep up with the exercises we were supposed to do. Afterwards I let the instructor know that if you are from Italy, there are only two things you do at that time in the morning: drink an espresso and eat a croissant! In the end I managed to finish the session and felt proud of myself; of course I took a nap after lunch.

Then I was off to California and was welcomed by the sun and nice temperatures. It was my first time in the area and I enjoyed my introduction…biking around Livermore, and a hot tub at the end of the ride was a real treat!

Too soon it was onto Sonoma County, Santa Rosa, where I couldn’t help but make comparisons wi 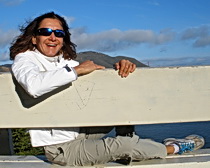 th the wine regions of Italy. I missed seeing the medieval castles and watch towers of the Piemonte, but thought the landscape very similar to the rolling hills of Tuscany’s Chianti region which is closer to my home. Hiking in the nearby giant redwood forest was incredible and a highlight of the trip. I had never seen anything like it before! I also took countless pictures from the look out over the Golden Gate Bridge. But the biggest highlight of all? I got to watch the Super Bowl. I really enjoyed the atmosphere, and spending the entire afternoon in front of a big screen television dressed like a real San Francisco 49ers fan (it was really too bad that they lost). I also liked the players with tattoos, so the 49ers quarterback, number 7 was my ideal man!

Many ExperiencePlus! travelers have told me about the beauty of Lake Tahoe, and I looked very forward to seeing it with my own eyes. When I arrived it was a cold, sunny day and I couldn’t believe the truly awesome view of the blue lake surrounded by white mountains. Skiing at Northstar was great, I enjoyed the runs I did with my two excellent local guides who graciously inv 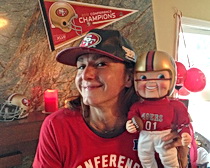 ited me to enjoy their home sauna afterward. What a treat and what a house!

Next up…Santa Barbara, California where it was sunny and warm with a view of the ocean. I couldn’t fathom that I was walking around with Carolyn in shorts and t-shirts after the ski jacket and boots of the day before. The Santa Barbara Wine Country was a treat for Valentine’s day! “Wine improves with age, the older I get the more I like it”. We also went hiking on the Romero Trail for Fat Tuesday with friends from all over the world…biked 55 miles over the Ojai Pass and Lake Casitas, which put my legs to the test. Fortunately there was also a “rest” under the stars in the hot tub that night! I miss Storm – the dog, but I brought some of his hair all the way back to Italy with me!

The Pacific Coast Train took me to Union Station in LA and I had two days and lots to see and do, thanks to my friend Charlie. We hopped into his convertible and I navigated using the map of Movie Star Homes. Though our efforts weren’t particularly successful I had a lot of fun trying to read a giant map and street names at the same time! 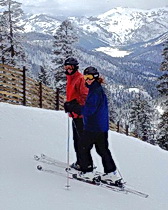 Dancing with Frankenstein to “The Blues Brothers” music is not something that happens every day, unless you happen to be at Universal Studios of Hollywood! I also convinced Charlie to do the “Mummy Ride” with me which I confess was a mistake so soon after french fries and a hot dog.

Before I knew it, it was time to head east to Charleston, South Carolina where my friend Meredith took me on a culinary and walking tour of the city. I definitely ate too much, but I loved the architecture, and the southern cuisine. There was much to enjoy in this beautiful city too, including a kayaking trip and working out at Meredith’s gym. I also loved practicing country line dancing watching a video on YouTube, in her living room! I’m sure the glass of wine helped us keep the rhythm! 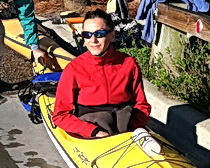 Many thanks to all the wonderful people and ExperiencePlus! cyclists, who hosted me and made me feel at home, or better, as if I were in a five star hotel! Thanks for the incredible meals and conversations we shared. Thanks to Cyclologic in Scottsdale (AZ), the Livermore Cyclery (CA), the Ashland Tennis and Fitness Club (OR), and “Il Tavolo Italiano” in Charleston (SC) for offering space for our events. Not to mention Joe and Joyce Friel, Carolyn, Kathy, Deena and Meredith who opened their homes to friends and cycling fans. I miss you all! Until the next adventure, a big hug! Cristina

You can join Cristina in Italy June 5 – 12 on the Cycling the Best of Southern Tuscany, or the July 2 – 11 Bicycling Venice and the Dolomites tours.

Cristina - Cristina Taioli was born in Cesena, Italy where she also currently lives. She received her B.A. in Environmental Sciences at the University of Bologna. She is currently working on her Masters in Ravenna in "Environmental Cooperation and Sustainable Development". Cristina has worked as a researcher on sea turtles and sharks in Greece, Costa Rica, and the Bahamas. She has been a Marine Biology teacher in the Red Sea (Egypt), and the Maldives, and a Dive Master on boats in Thailand. She lived for 2 years in the U.S. and Australia. She has climbed Mount Kilimanjaro in Tanzania, Africa (19,000 feet) and has written 2 books. She speaks English, Spanish, French, and of course Italian! Cristina has been with ExperiencePlus! since 1999 leading cycling tours seasonally, mostly in Italy.