Confessions of a Tandem Cyclist 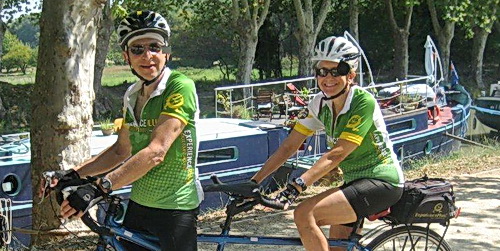 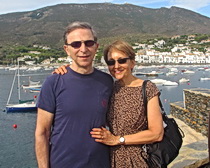 Jim and Sari Rosokoff live in Glastonbury, CT, a suburb of Hartford.  Three years ago, Jim retired after 32 years as a solo dermatologist, after being inspired by other retired ExperiencePlus! cyclists.  Sari retired 6 months later after closing the practice books and now spends her spare time telling jokes to the residents of her mother’s assisted living facility.  Jim spends his time as his alter ego, Dr. Uke – spreading his love of the ukulele throughout the world.  He teaches adults and kids, leads three bands, and maintains his website, www.doctoruke.com, the place to go for ukulele arrangements of over 1000 songs.  Dr. Uke and Daughters is his favorite of the three bands he leads.  Jim, and daughters Sylvie and Jacqueline, have been entertaining together in CT and New York City for almost 20 years.  Sari is the proud producer!  Check them out on YouTube.  The rest of their time is spent on their tandem bicycle. 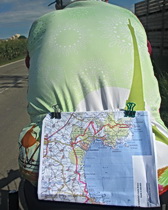 Jim (aka Dr. Uke) and I have been tandem cyclists for nine years and will take our 8th ExperiencePlus! tour later this year.  We started tandeming when our youngest child left for college as a way to enjoy riding together.  Most tandem teams tell a similar story: the two riders are of unequal ability, and, on single bikes, one rider slows down the other.  We borrowed a friend’s tandem for a test ride to see if we enjoyed it, and were hooked.  In tandem terms, Jim is the captain, with all the responsibility for steering, gearing, and braking, and I am the stoker, providing power, navigation, traffic alerts, jokes, and occasional back scratches. (My itches, of course, remain scratch-less.) The stoker can also make phone calls and take pictures while on the move.  Some of my favorite photos are of fellow riders cycling by.  Since the front and rear pedals are connected so the stoker has no choice but to pedal, despite that fact, we have heard onlookers shout “She’s not pedaling”, even in other languages!

Tandem cycling requires the stoker to cede all control to the captain, and to trust that he or she (we know several female-captained teams) will keep the bike upright and traveling safely.  It’s not for every couple, and most know whether or not they can handle this division of responsibilities.  Some say that tandem cycling either makes a relationship stronger, or breaks it up! 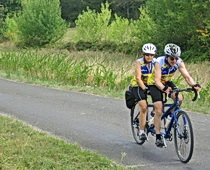 When Jim first proposed that we try riding a tandem, I agreed on the condition that he not criticize how much (or little) effort I contributed, and that I could choose the fashions!  Nine years later, I find myself working harder than I ever thought I would, and we now have a great collection of jerseys.  Tandem cyclists consider it a team sport, and wear matching jerseys; Jim and I collect new ones on our travels. 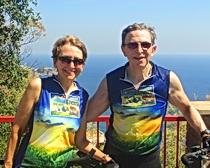 Once we mastered the basic tandem skills, we began looking for opportunities to combine riding and traveling. Most tandem riders who travel abroad have bikes with coupling systems which allow them to be taken apart and packed for travel.  We opted to travel light, and our search led us to ExperiencePlus!, because they have several tandem bicycles in their fleet. We flew to Venice, Italy for our first ride, and met our great Cannondale bike, on which we have now crisscrossed Europe seven times.  On that first Venice to Pisa ride, each day was the farthest we had ever ridden before, and we were thrilled to thoroughly enjoy every minute.  Our hope at the start was that when we reached Florence, we would be happy that we were among the riders continuing on to Pisa.  ExperiencePlus! exceeded our expectations in every way and we agreed that it was the most fun we had ever had on vacation.

Since that trip, we have ridden “our” trusty blue tandem through the villages of Bavaria, the Dordogne and Languedoc regions of France, along the Danube from Germany to Budapest, the Puglia region of Italy, and the Catalonia area of Spain. At the end of each tour, we fondly watch our bike being loaded onto the van until the next trip.  Stateside, we have taken several all – tandem group trips including Williamsburg, VA, Niagara Falls, Canada, Cooperstown, NY, and this coming spring, a riverboat/cycling trip down the Mississippi from Memphis to New Orleans. 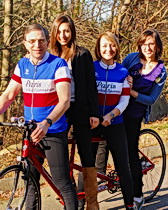 Our two daughters also love to ride the tandem and join Jim for a spin around town when they come home to visit.  He will often do multiple loops on our 13-mile neighborhood circuit with each of his stokers. If we had started when they were younger, I am sure we would have purchased a coupled quad bike and been quite the sight on the road.  At tandem rallies, we love seeing families enjoying an outdoor team activity all together.  It’s inspiring to see parents and three kids all pedaling away on a 5 seat bike.

For us, tandem cycling has been a wonderful way to spend time together, exercise, make new friends, and see the world.