Finding the Plus! on her First-ever Bike Tour

Those of us who love bicycle touring know that our reasons for doing so are as varied as the places we choose to explore. But making a decision on where to take your first tour can be overwhelming. For Allison Ryan, who joined Cycling the Best of Provence with her husband Ryan Stauffer, the decision was easy. 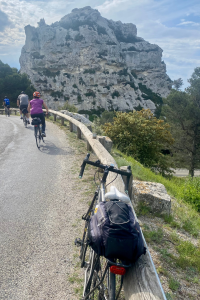 “This trip was planned with my good friends who are really into bicycling, so they got the recommendation about ExperiencePlus! from their cycling contacts,” Allison shared in an email exchange we had about her time on tour.

Allison, who lives in California’s San Francisco Bay Area and works as vice president of data science for a company focusing on early cancer detection, says she would describe the Provence tour to a friend simply as “amazing.”

She had never ridden more than 20 miles in a day prior to going on tour with ExperiencePlus! Her pre-tour training plan was fairly loose and she didn’t build up as much endurance as she wanted. But, that was just fine. She could chill on day seven while others summitted Mount Ventoux. 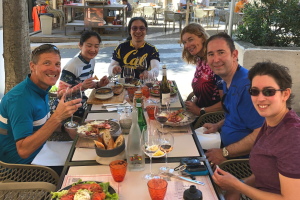 Her list of favorite experiences includes the region’s beautiful scenery, the food and wine, and the encouraging chalk messages and pointers for bakeries and cafes that tour leaders scribed each day.

“The guides and the other members of our tour were also a ton of fun to get to know over long French dinners,” Allison said.

Her favorite experience? Allison enjoyed hearing the chirp, song and call of birds and other animals while riding quite country roads with no traffic.

“You don’t hear these things traveling by car,” she says.