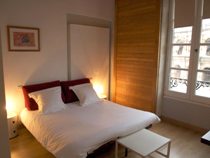 Our hotel in Nimes on day one of the Cycling the Languedoc tour is one with a rich history and is newly renovated and refurbished in modern taste.  The hotel’s name, “Le Cheval Blanc” has been around for over five centuries. Although, not always located in the same place, the name carries respected recognition in Nîmes. The building the hotel is currently located in was built in 1709 and was an important textile factory. Shortly after the revolution the building was turned into a hotel and managed by different private families until the early 1940s when the Family Layall took over management. The hotel was a success and personalities such as Pablo Picasso, Coco Chanel, Jean Cocteau, and Jean Marais stayed there.

In 1980 the hotel was bought by the city who wanted to make Nîmes the place to be and be seen for all Parisians seeking culture and an exciting nightlife. The city hired the very best, Jean-Michel Wilmotte, well-recognized interior designer, known for his elegant and sober style and Patrick Pagès, one of the best chefs, but in 1993, the project was a flop and the hotel closed. After 13 years of abandonment the hotel reopened in 2007. Its turbulent history and its prime location facing the Roman arena make it the place to be while in Nîmes.

Rothenburg, Germany can easily be classified as a ‘classic’ romantic medieval city, and our hotel in town on night three of Bavaria’s Back Roads, fits in well alongside Markus Tower and Roeder Arch.  Among half-timbered charming buildings with geraniums adorning windowsills and tradesmen placards hanging over the narrow streets of the town, the hotel structure has been around since its construction in 1200 AD.  Formerly a tavern and guesthouse for weary travelers, the Romantik Hotel Markusturm still functions as a place of rest.  Don’t let the age of this structure deter you; the hotel owners have worked hard to keep the charm and enmesh it with today’s expected comforts. You’ll quickly find that they have more than adequately fulfilled their motto, “medieval meets modern.”

Cycling the Dordogne Plus! the Vineyards of Bordeaux 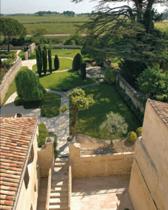 Our hotel on the last two days of the 11-day Plus! tour is one you’ll remember for years to come. Settled in the small medieval town center of Saint-Emilion, Le Logis des Remparts has beautiful grounds with walking paths and a gorgeous swimming pool if you opt to take a dip.  The hotel is built along the town’s wall, and is within walking distance of the treasures of UNESCO World Heritage Site Saint-Emilion.  Be sure to enjoy the town’s stonework, the nearby vineyards, and when all is said and done, a relaxing breakfast on the patio will be waiting for you before another bike ride in Dordogne.

After riding through olive groves in Southern Spain, you’ll reach Jaen, and up on top of a hill overlooking the town will be a Moorish castle, the place where you will rest your head that night.  The Parador in Jean is spectacular, and you’ll wonder whether or not the view below you is dream or reality.  The fortress was built in the 18th century in an Arabic style, bringing with it a sense of fortitude and permanence as well as historical prowess.

An exceptional dinner will be served in the majestic dining room of the castle.  Eagerly anticipate the ajo blanco, a soup that highlights the region’s specialties of garlic, oil, & almonds.  You may also have the opportunity to savor Chef Alberto Avila Benito’s dishes with eggplant, local mushrooms in the fall, or venison.  This evening will be one punctuated with memorable experiences for many of your senses from taste to sight to smells.

Bicycling the Danube from Germany to Vienna Plus! Budapest 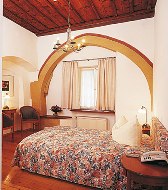 ExperiencePlus! has a thing for UNESCO World Heritage Sites; maybe it’s because the medieval architecture is so charming, or because we love how each site represents a glimpse of the quintessential past.  Regardless, Regensburg, Germany is another UNESCO site we’re happy to share with you.  On night one of the Danube tour, we stay in a hotel that sidles up next to Regensburg’s city center.   The Hotel Muenchner Hof takes its guests back in time; your room may be of Gothic, Renaissance, or Baroque-era designed style.  The interior of the building is augmented by rustic timbered frames and stained glass windows from 1901 adorn hallways and the ceiling in the dining area.  If you continue to look around, you’ll find vestiges of former owners’ love for subtle yet beautiful artistic additions to the building from painted wall moldings to intricately carved door frames and arches.  Relish in the historical significance of the building as your tour begins along one of Europe’s most important waterways.

Bicycling Venice to Florence / Bike Across Italy: Venice to Pisa 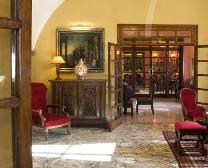 On our Bike Across Italy tours, you’ll find yourself nestled right in the heart of Florence at the Hotel Balestri, one of our long-time favorite hotels.  Located on the banks of the Arno River, it is here where you will experience authentic Italian elegance.  Rooms either look on over the river or the city and Florence’s architectural gems like the Duomo and the tower of the Palazio Vecchio.  The Balestri is a short walk from the Ponte Vecchio, and is located in a wonderful neighborhood full of opportunities to people watch and window shop.  After dinner, be sure head up to the terrace on the roof to gaze over the city for an unforgettable view.  If you’re on the 12 day tour that continues t Pisa, you will be able to stay here for two nights!